This is a demo for Act of War: Direct Action, allowing you to play one singleplayer level of this strategy game from Atari.

Download free GOG PC games. We have every game from the GOG.com catalog available to download for free! Free GOG PC game downloads by direct link.

In Act of War, a ruthless secret group of petroleum company owners known as the Consortium finances an international terrorist organization to stage a series of attacks around the world in an effort to destabilize the global economy and profit from skyrocketing oil prices. Gangstagangster disciples. A group of seasoned military veterans and young techies are recruited into a special high-tech task force and begin the worldwide job of tracking down the terrorists and uncovering the international conspiracy before the terrorists can strike in the heart of America itself.

Ripped from today's headlines, Act of War is a frightening and believable tale of suspense, international intrigue and geopolitical military conflict. Through a techno-thriller story constructed by best-selling author Dale Brown, this real-time strategy experience puts you squarely in control of counterterrorists!

Act of War: Direct Action is a modern-day shooter, based on the novel of the same name by best-selling military fiction author Dale Brown. The game is designed to add depth to its story with nearly an hour's worth of original, live-action video, which is interspersed with the gameplay. Players take the role of Brown's recurring hero, Jason Richter, who leads 'Task Force Talon' to follow a twisting, techno-thriller plotline, wound around terrorism and conspiracy, that leads from Washington, D.C. to Moscow.

Act of War is simultaneously very timely and unflinchingly retroactive. Its timeliness is found in its story -- it's a hard-hitting, earnestly told tale of petrol-paranoia, very reflective of the times we're living in, and in that context, quite believable. But it's retroactive in the manner that it presents this story: by means of live-action, TV mini-series quality cutscenes. The CD-ROM-era might have left us with a certain measure of disdain for this sort of presentation, but that shouldn't let that stop you from checking out Act of War -- it also happens to be a solid and enjoyable one real-time strategy game as well. It's not unlike Command & Conquer: Generals in this regard, but with more of a Tom Clancy than a G.I. Joe bent.

The game's story plays an extremely prominent role in the single-player campaign. Lengthy cutscenes bookend each mission, and even during missions a picture-in-picture display plays out events happening outside of your view. The story is always 'there,' for the most part, and when combined with other elements of the game's design, helps to keep the action relevant to the narrative and the pace brisk. New York Times bestselling author Dale Brown served as a story consultant for the game, and state of the world that Act of War posits is frighteningly familiar, with events that drive the game hitting close to home. It's a shame the cutscenes aren't better - they come across as unintentionally amusing, with actors hamming it up like crazy, coming off as one-dimensional caricatures. The villain has a permanent scowl etched onto his face, while the protagonists are uniformly selfless and heroic. Luckily, Act of War provides a solid enough game experience to offset this, and even make you care about the story. All of the game's missions are open from the get-go, making it somewhat like a movie on DVD -- it isn't hard at all to blast through the game straight-up at the default difficulty setting, but it's cool that, if you run into any sort of snag, you can skip it and carry on with the story. You might miss some narrative tidbits, given how densely packed they are within the missions, but you can live missing a cutscene or three.

The game offers three factions, but you only get to play as two of them in the single-player game: a global covert-ops group called Taskforce Talon, and the plain-Jane U.S. Army. The third group, which plays the antagonist role, is The Consortium, ostensibly a terrorist group bent on annihilating the freedom-lovin' West, but whose true colors are revealed as the story progresses. (You get to play the Consortium in multiplayer.)

Apart from its strong focus on narrative, Act of War isn't too different from most modern RTS games. Its missions are designed around a series of pivotal cutscenes, and generally, the action that carries you from one to the next is pretty brisk, and focused. You build bases and acquire resources, but the focus is more on actually moving large forces through the maps, rather than having lots of buildup leading to a quick, decisive battle.

This is partially facilitated by Act of War's streamlined resource model. Just like in real life, there's only one resource you have to worry about: American Dollars. They're seldom harvested in the traditional sense; the closest it gets is building oil derricks on mineral rich patches of the map. More effective are more logically direct methods of acquiring cash: taking over banks, and capturing enemy troops. 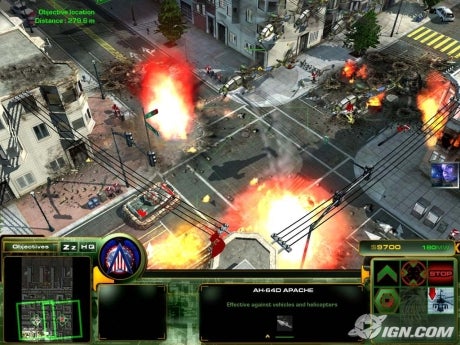 Act of War's action largely takes place within urban environments, and one of the game mechanics that makes these otherwise dense and tactically constraining environments compelling in an RTS is the fact that you can clear and capture buildings. It's as simple as selecting a group of units and sending them to a building. They'll enter it and effectively commandeer it until you move them or enemy units force them out. They'll benefit from cover when they're inside a building, which allows units like snipers and anti-aircraft artillerists to do their thing effectively. And if the building that they've captured is a bank, then you'll benefit from an increased, regular cashflow. 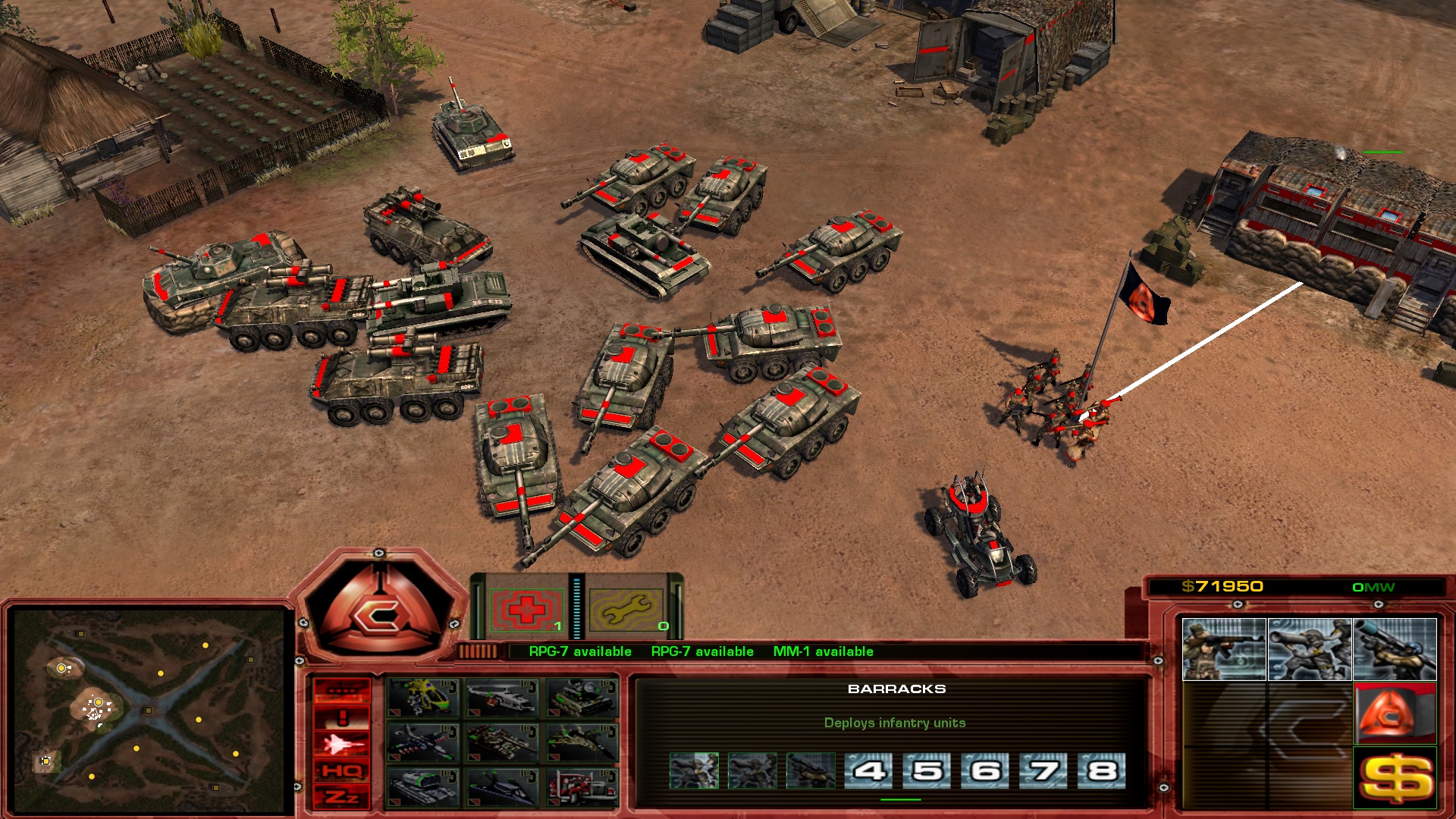 Taking prisoners of war is another extremely viable method to generate income. It works like this: if you critically injure a combat unit, you can issue your infantrymen an order to capture them. Ditto with vehicles and the non-combat personnel that pilot them. Once captured, you send them back to your base -- i.e., prison proper -- and they begin to generate cash for you. Presumably, you're putting them to work in salt mines, or something. Either way, it's a compelling way to generate cash for your forces, and one that forces you into action, rather than the frenetic sort of housekeeping that RTS-games are generally known for.

As you'd imagine, having your units captured is particularly annoying, especially in multiplayer. The idea that your downed units are also generating cash for your enemy is pretty hard to take. It bears mention that Act of War plays much more like a traditional RTS when it comes to multiplayer matches. Without the story driving things, there is much more of a focus on building a base, progressing through a tech tree, and generally pursuing the sorts of strategies that you're used to. It's really in the multiplayer matches that you start to get a feel for how differently the three factions play, so expect a period of experimentation before you become truly comfortable with any of the three factions. For what it's worth, the game seems relatively balanced at this point, but, as is often the case with RTS games, inbalance issues can sometimes take weeks to appear, so we'll continue to watch.

Whatever your motive is for checking out Act of War, you probably won't be disappointed. In many ways, it's a by-the-numbers RTS, but a solid one, with a few imaginative mechanics built into it. The single-player game is briskly paced, well punctuated by narrative elements. Despite the fact that it suffers from some altogether goofy cutscene performances, the story is genuinely gripping at times, and just a little bit subversive. If you're jonesing for an RTS experience, you could do much worse than Act of War. 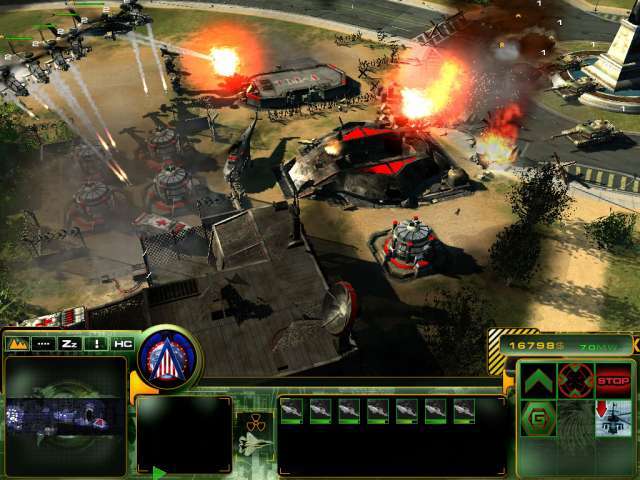