The Junior Certificate (Irish: Teastas Sóisearach) or 'Junior Cert' for short, is an educational qualification awarded in Ireland by the Department of Education to students who have successfully completed the junior cycle of secondary education and achieved a minimum standard in their Junior Certificate Examination (Irish: Scrúdú an Teastais Shóisearaigh). These exams, like those for the Leaving Certificate, are supervised by the State Examinations Commission.A 'recognised pupil'[3] who commences the Junior Cycle must reach at least 12 years of age on 1 January of the school year of admission and must have completed primary education; the examination is normally taken after three years' study in a secondary school. Typically a student takes 9 to 13 subjects – including English, Irish and Mathematics – as part of the Junior Cycle. The examination does not reach the standards for college or university entrance; instead, a school leaver in Ireland will typically take the Leaving Certificate Examination two or three years after completion of the Junior Certificate to reach that standard.

The objective[4] of the Junior Cycle is:

..to provide a well-balanced, general education suitable for pupils who leave full-time education at the end of compulsory schooling or, alternatively, who wish to enter on more advanced courses of study.

The first Junior Certificate syllabus was introduced in 1989 and examined in 1992.[5] It replaced two earlier examinations:

The syllabuses of the Group Cert and Inter Cert were coordinated from 1968.[10]

The new, modern Junior Certificate course was acclaimed as it was much more flexible than its predecessors. It quickly became the minimum requirement for getting a job in Ireland.

Near the end of the decade, the Department of Education and Science began to replace many subject curricula, particularly those that were dated, such as History and Geography. In 1999, Civic, Social, and Political Education was introduced as a subject and made mandatory from 2000, when Religious Education was also brought in. Religion was phased in with just a few schools adopting it in its first year, but now nearly all do the exam for Junior Cert, whilst CSPE was implemented nationwide. In 2002 a new Science course was introduced. The new course emphasised greater class participation and introduced the awarding of a percentage of marks for class practicals throughout the three years. However, many teachers complained about a lack of information from the Department about this change. Sample papers were not released until early 2006, the year when the new exam would be sat for the first time. Also, some schools complained that they did not have the laboratory facilities to do the new course but were forced to teach it anyway.

In 2004, results were made available on the Internet for the first time thus allowing students who, for instance, had moved school or left school to get their results without having to return to their old school. The lack of students taking honours Maths has been a consistent issue throughout the history of the Junior Certificate. However, in recent years the trend of taking honours Maths has increased positively.[11]

The Junior Cycle is the first three years of second-level education. In the final year of the course, teachers allocate a substantial amount of time for revision of key topics. Candidates also practice answering questions which appeared on previous examination papers. Courses are quite broad – for example, the Business Studies course covers business organisation, marketing, economics, accounting and several other areas. The same is also true of the Science course, which covers basic physics, chemistry and biology. The Leaving Certificate exam, by comparison, is much more specific.

†An exemption from taking Irish may be awarded in some cases, for students with a specific learning difficulty such as dyslexia or Autism Spectrum Disorder, or those who did not attend school in the country before their twelfth birthday.

Mallorca 2021 kitsempty spaces the blog free. Optional subjects are offered at Ordinary and Higher Level, some at Common Level.

‡Classical Studies can not be taken by a student who is also taking Greek or Latin.

The final examination takes place after three years of the course, in early June. The exams always start with English, then the other core subjects and finish with the subjects that have the fewest candidates. They usually last two and a half weeks. The exams can take the form of written papers, aural exams (which are usually included at the start of the written paper), practical exams (for example, in Music, 25% of the final result is based on a performance and skills test in front of an examiner) and marks from course work assignments (such as in CSPE, where 60% of the exam rests on an action project completed during the school year). Exams normally range from two to two and a half hours long; most subjects are one paper only (i.e. they are taken in a single session), however, three subjects have two papers at a higher level – Irish and Mathematics. Until 2017, the English and business studies examination also had two papers at a higher level.

Schools with students taking the examinations will have one or more examination centres (individual enclosed rooms in which examinations take place), and almost always at least two, because the Leaving Certificate and Junior Certificate examinations cannot take place in the same centre. Smaller centres can be used for students with reasonable accommodations because of a learning or writing difficulty. Each exam centre is supervised by an external invigilator, usually a teacher from another school or an employee of the SEC. A staff member of the school is hired as an examination aide by the SEC to act as a liaison between the SEC and the school officials during the examination period. Candidates may not enter the exam centre after the first 30 minutes and are permitted to leave the centre after 30 minutes have passed, up until the last 15 minutes of the examination, although this practice has been abolished in some schools, and is discouraged in many others.

The Irish Times published an article where teachers expressed their concern that some syllabi for certain subjects (e.g. Business Studies) were not 'up-to-date' with current events and would therefore not encourage students enough to think independently and apply theory to real-world scenarios.[16]

At the Junior Certificate, students can take an examination subject at one of four levels. These are:

Grading is split into seven ranges.

A mark below 10% receives no grade. Above this, there are six ranges of 15%, from F up to A. Grades A, B, C and D are passing grades, E and F are failing grades; therefore, the pass mark for the Junior Cert is 40%.

In the Junior Certificate candidates have the option of answering either in Irish (only if they have been in the Irish stream) or in English, except in the case of the subjects Irish and English and questions in other language subjects.[17] Certain subjects and components are not available for bonus marks, marks awarded also vary depending on the written nature of the subject.

Students who face disadvantages (e.g. suffer spelling problems caused by dyslexia, dyspraxia, dysgraphia, or other disorders such as Autism Spectrum Disorder or ADHD) cannot be penalised for poor spelling in exams such as English and Irish. These candidates will then be marked more leniently on all topics (e.g. if a student has a spelling problem in English he/she will be marked out of 50 for their mechanics). 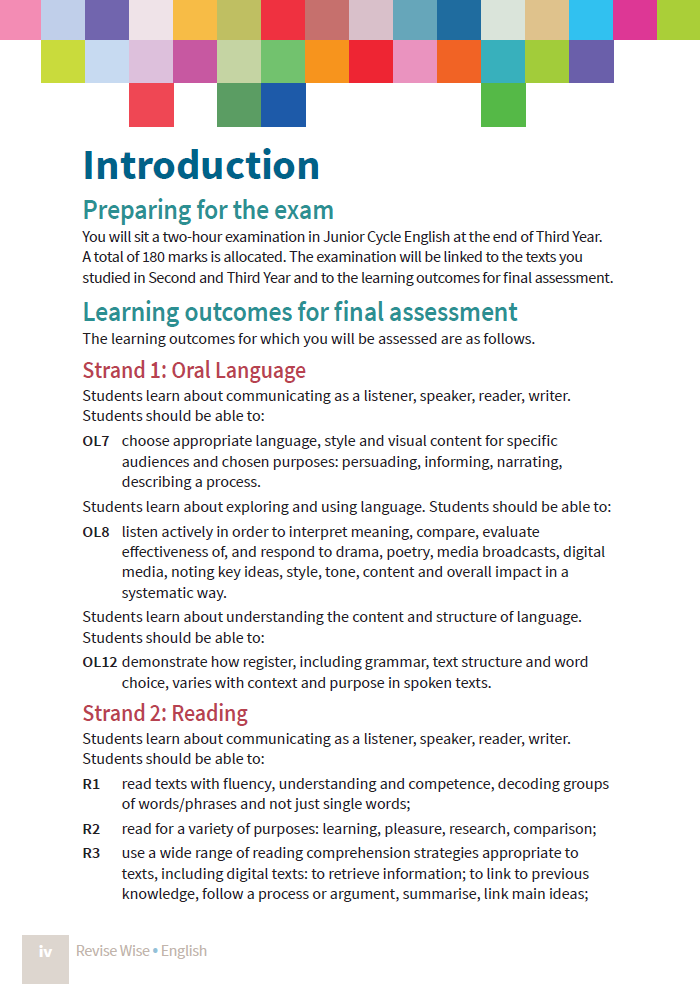 Junior Cert results are not a prerequisite for the Leaving Certificate, so that all students may continue to their next year of education no matter what their results. The Junior Certificate (and more so, the Leaving Certificate) results take centre place in the Irish media during the week surrounding their release. The newspapers publish various statistics about the exam and cover high achievers (some receive ten or more 'A' grades). In 2019 much controversy was caused by the delaying of the results from the usual 12–15 September dates until 4 October.

If a student is unhappy with a grade they received on any of the exam results, they may appeal the decision made by the SEC. They need to pay a fee (in 2010 the fee was set at €32 per exam) and the principal of the school writes a letter of appeal application to the State Examinations Commission, stating the candidate's name, exam number and the exam they would like to appeal. There is a deadline to appeal, usually 14–21 days after the results are published, in which the student's application must be made. The appeal results are usually handed out mid-November. The grade that is received this time is final, and no more appeals can be made. If the candidate's grade did not change, no further action will be taken. However, if a change did occur, then the candidate will be refunded the appeal fee via a Cheque made out to the principal of the school. These refunds take time to be issued, but in an appeal made in September of one year, the refund was issued as late as March in the following year.

The vast majority of students continue from lower level to senior level, with only 12.3% leaving after the Junior Certificate. This is lower than the EU average of 15.2%.[19]

In late 2009 the Irish Government considered for a short period of time to completely scrap all Junior Cert examinations permanently. The move was met with criticism and outrage from the Teachers' Union (ASTI), but the Government said that scrapping the annual examinations and replacing them with continuous assessment would save the country €30 million.

However, later on, the government agreed to not scrap the Junior Certificate and instead, introduce a brand new syllabus in English for students starting First Year of secondary school in September 2014, with only 90% of the test going for a written exam. The other 10% is an assessment task taken during the third year. This is a reflection of the learning from the second Classroom-based Assessment (CBA). The first CBA takes place at the end of 2nd Year, which is an oral presentation. Students have 3 weeks to choose a topic and have to present it. The second CBA takes place at Christmas of 3rd Year. It is called the Collection of Texts in which a student will choose 4 written pieces throughout the 3 years from 4 different genres and will re-draft them. The CBA is graded using word descriptors and appear alongside the find grade on the Junior Cycle Profile of Achievement. The final written exam at higher and ordinary levels now only consists of a two-hour paper.

Pilots of the new system have been underway for three years, with the principal of St Joseph's College, Lucan, in particular noting that the 'engagement in learning' proved to be a panacea for the school's discipline problems.[22] 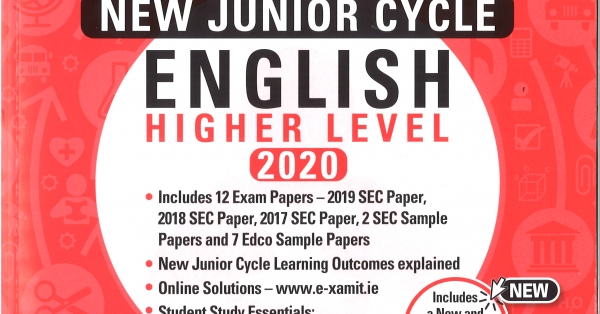 On 15 January 2014, the Department of Education and Skills announced that the new name for the Junior Certificate will be called the 'Junior Cycle Student Award'.[23] 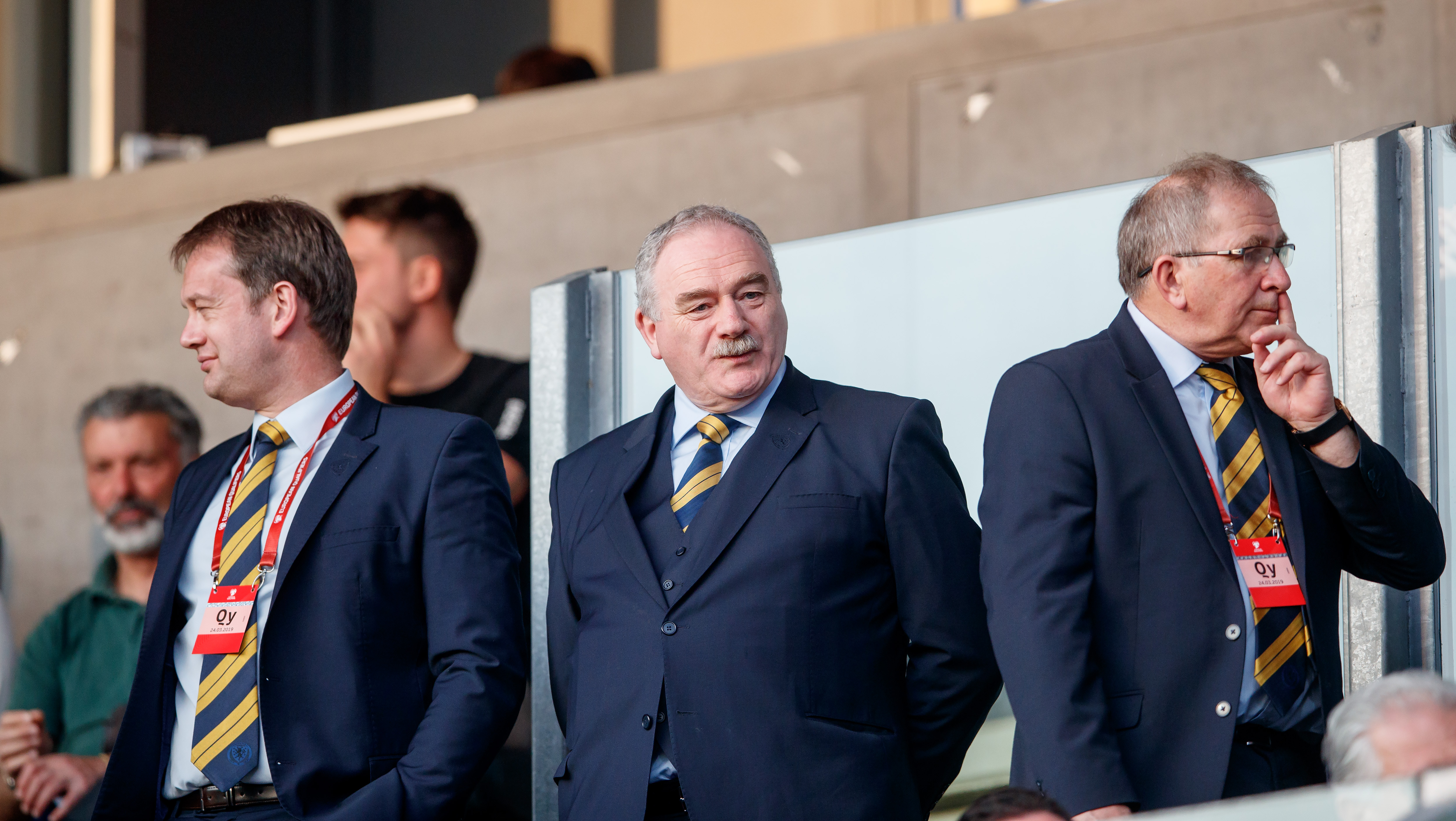 The Junior Certificate is earned by passing a required exam that takes place in secondary schools in the Republic of Ireland.

Three exams must be passed in order to receive a certificate: They are English, Mathematics, and Irish. If a student has not lived in Ireland for at least seven years before the exam, he is not required to sit for the Irish exam. A student may then take 3-6 other subjects to get his certifcate.

The results of the exams are given in mid-September.