Norton Ghost is one of the best tools that can help us create disk image, backup selected partitions or any important file. And you can boot into the Norton Ghost recovery environment to restore image backup or troubleshoot other problems.

To enter the Norton Ghost recovery environment, a recovery disk is needed and you can make one by clicking Tools > Create Custom Recovery Disk CD to make it. However, it only allows you to create custom recovery disk with CD while there is no built-in CD/DVD drive for most recent computer.

Fortunately, it’s possible to create Norton Ghost bootable USB to help you boot into the recovery environment. Check the next part to get the detailed steps.

Here in this part, we will tell you how to make Norton Ghost bootable USB in Windows 10/8/7. Although the whole process is kind of complicated, all you need to do is read them through. Or if you prefer an easier way to create bootable USB as well as a free PC backup tool, you can refer to the next part to get it.

Notes:
◆ Now you can still download the latest version, Norton Ghost 15. It only offers you the 30-day free trial version and then you need to pay for it.
◆ It will erase all the data on the USB drive, so backup your USB flash drive in advance with USB backup software if there's any important stored on it.

2. Type “diskpart” and press Enter to launch the DiskPart utility.

3. Type “list disk” and press Enter to locate the drive number of your flash drive.

4. Enter the following commands one by one and wait for each step to complete. Please remember to replace the “x” with the USB’ s drive number that appeared in the 'list disk' command.

5. Then, the DiskPart utility will close and you will see the standard Windows command prompt. Enter the following commands:

Notes:
◆ If you installed Norton Ghost in another folder on the hard drive, please type the correct location.
◆ Replace “x” with the correct letter of your flash drive.
◆ If your computer supports Unified Extensible Firmware Interface (UEFI), you should format the USB flash drive as FAT32 instead of NTFS. To format the partition as FAT32, type format fs=fat32 quick, and then click Enter.

Step 2. Copy the contents of the Norton Ghost recovery disk 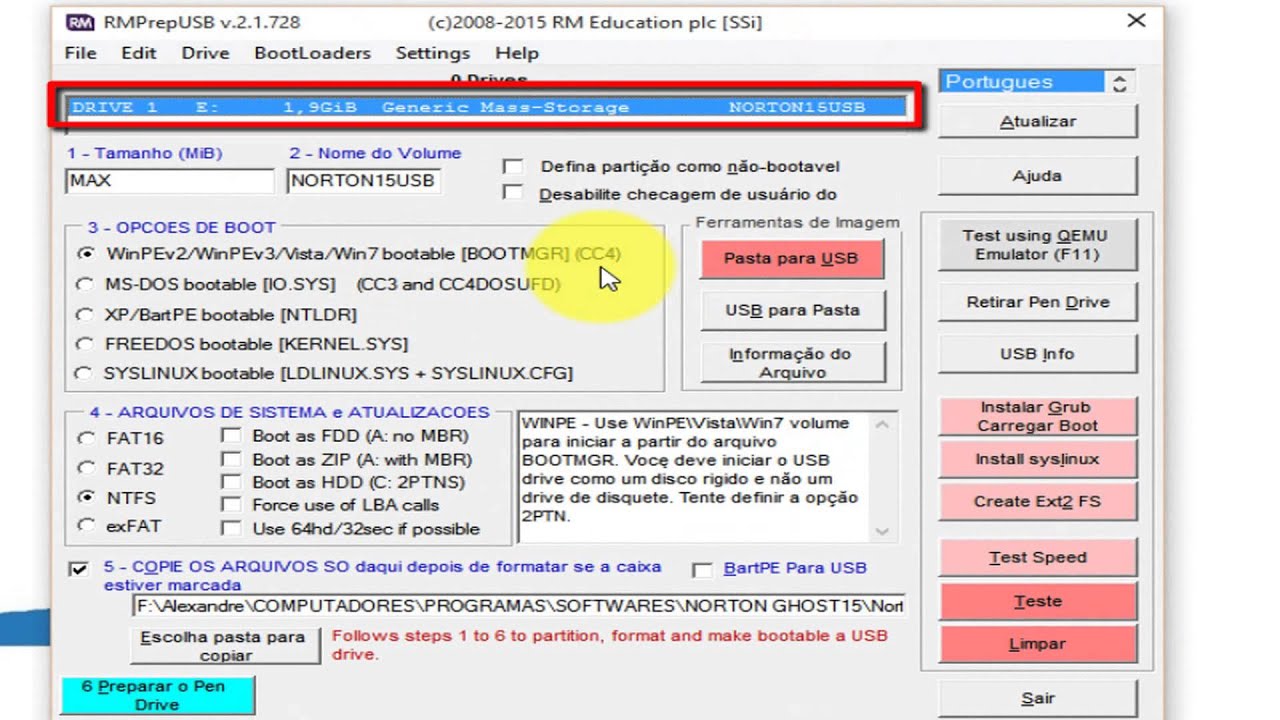 Insert the recovery CD and copy of its files to the bootable USB flash drive. Or if the recovery disk is an ISO image file, you can mount the ISO with a virtual drive program and then copy the files to the USB driver.

You can also create and store image backup to that USB, then when your computer goes wrong, you can boot your computer from the USB drive and perform a restore.

3. Then it will ask for the source image. Choose the image you want to restore.

4. Select the destination drive and OK to confirm.

As you can see, the whole process is kind of time-consuming and you may meet some unexpected errors because of improper operation. And do not forget that it only offers you a 30-day free trial version. Why not try one free Norton Ghost alternative? It offers more powerful backup options compared to Norton Ghost and can help you create bootable USB in only a few clicks.

On internet, some users report that they cannot find a way to run the Ghost utility from USB key, because they don't have a CD drive bay. Now, let's have a closer look at this scenario.

Do you have similar issue? If so, please keep reading below to create bootable USB for Norton Ghost 15.

Select your USB drive under Device and FAT32 as file system, then tick the format options, Format Device and Create a DOS startup disk, select Boot folder of Boot Norton Ghost by clicking the three dots and click OK. After that, click Start to mount DOS system files.

Step 4. Click Yes when you are asked if you are really want to process with Format. Then, click OK.

Step 5. Copy all the content of Boot Norton Ghost folder without Boot folder, and paste to USB drive.

Now, you've got a Norton Ghost bootable USB. To boot from it, see Step 3 on the previous part.

AOMEI Backupper Standard is the best free Norton Ghost alternative. It works well on all Windows OS including Windows 10/8/8.1/7.

How about give it a try? First download and install it on your computer and then follow the steps below to create bootable USB as well as create image backup. Please remember to backup your USB drive in advance, because it will erase all the data.

Step 2. Select a type of bootable media you want to create and click Next to continue. For better performance, the Windows PE bootable disc is recommended.

Note: The two options enable the bootable media to boot from legacy MBR mode or GPT/UEFI. You can view your motherboard user manual for information on choosing boot options at PC startup.

Step 4. Select the USB drive to create this bootable recovery media and then click Next to run this process.

Create image backup for your computer:

Now you have created a bootable USB that can help boot your computer, then you can create system image or other backup types according to your needs. Just choose one backup option and follow the wizard to make it. Besides, you can set scheduled backup and then it will perform the backup daily/weekly/monthly.

Now you know how to make Norton Ghost bootable USB, even for users who don't have CD/DVD drive bay. To make it, first, you should format the USB drive and then copy the needed files.

Or if you prefer an easier way to create bootable USB, AOMEI Backupper Standard can help you make it. It also supports computer backup, restore, and clone just like Norton Ghost. And it’s totally free of charge.

AOMEI Backupper also provides higher version for advanced users, which have more useful features, such as, incremental and differential backup, USB plug in, Scheme, encryption, and more. Please give it a chance and you will enjoy a better user experience. 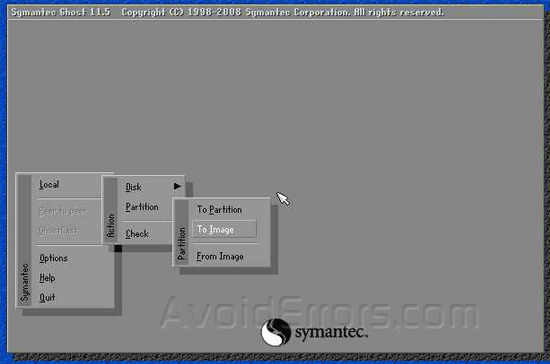 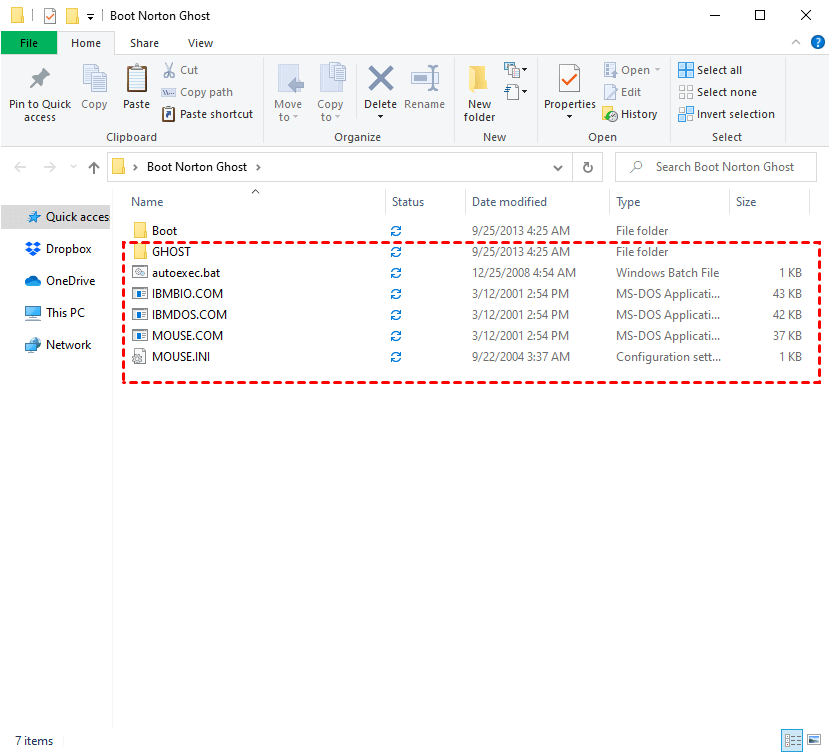